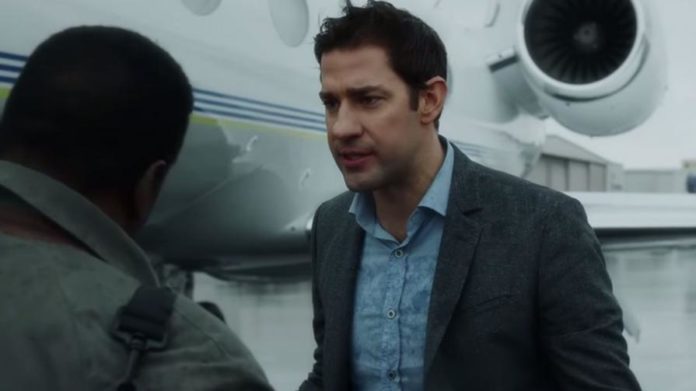 John Krasinski has abandoned his desk job at Dunder Mifflin for a desk job at the CIA—though this one comes with a bit more stress than anything he experienced in Scranton.

Krasinski is slated to front the new Amazon Video series Tom Clancy’s Jack Ryan, which is based on the famed Tom Clancy book series. Ryan is a CIA analyst who is unexpectedly thrust into warfare in the Middle East.

The Ryan legend is a storied one: The series has spawned films like The Hunt for Red October, Patriot Games, Clear and Present Danger, The Sum of All Fears, and Jack Ryan: Shadow Recruit. Krasinski will be the fifth esteemed actor to take up Ryan’s mantle, following in the footsteps of Alec Baldwin, Ben Affleck, Harrison Ford, and former Men’s Fitness cover guy Chris Pine.

The 90-second trailer that initially debuted at New York Comic Con features Wendell Pierce (aka Bunk from The Wire) in a prominent role. You can check it out below.

Tom Clancy’s Jack Ryan, created for TV by Graham Roland and Lost co-creator Carlton Cuse, is set to premiere on Amazon Video in 2018.

Workout Plans : Tone It Up: The Best Ab Workout Routine

Fitness Inspiration : Want to set goals and crush them? You can! We'll give...

April 18, 2018
Fitness Inspiration : Illustration Description Want to set goals and crush them? You can! We'll give you our 6 top tips for setting goals then...